The Elizabeth that I knew lived in a nursing home.  She was elderly and frail.  I don’t remember seeing her stand or even sit up.  I remember her as a tiny, fragile lump beneath the covers.  Her lips were dry, and her words were mumbled, and she was hard for me to understand.

I remember that it smelled in that place.  It smelled like everything awful, and it smelled like the chemicals that tried to wash the awful away. I was five-years-old.  What I remember most is that I did not like to go there.

Until I found her in a box of old letters.

In 1944, Elizabeth was living in Ohio with her husband, raising two children and devoting her time to her home and family, like most women of her generation.  Her eldest daughter had already married and moved a few hours away.  Elizabeth was probably still adjusting to this change, one of her chicks leaving the nest.  But Betty was safe.  She was happy.  She was protected and she was loved.  Elizabeth missed Betty, but she knew that Betty was okay.

Her eldest son, Charles Jr., however, was another story.  The distance between Elizabeth and her son did not escape her.  She could never, not even for one moment, take his safety for granted.  Every joy was tempered by her worry that Charles might be cold or hungry, depressed or homesick, or, worse yet, injured or imprisoned.

Charles had enlisted to serve in the United States military.  Somewhere far away, on the other side of the globe even, he was fighting in World War II.  Her heart was so proud of his selfless courage, but it was equally crushed by the weight of her fears for the safety of her son.

Elizabeth listened to radio broadcasts and read newspaper articles about the developments during the war, but what was happening on the frontlines still seemed distant.  News was not instant, and the images were static.  Life at home continued, as normally as possible.  She had teenagers to care for, Lewis and Maxine, and her daily routines helped to keep her occupied.

And she had letters.

Charles wrote regularly, and Elizabeth wrote to him often, as well, sending packages to remind him how much he was missed.  He enjoyed her gifts, like the peanuts she sent that he shared with his friends and fellow soldiers.  Occasionally, he asked her to send specific things that he needed, and she always obliged.  He shared funny stories, like the time that a deer sneaked into the barracks and ate all of the snacks, and he told her about the Abbott and Costello movie that they had watched for entertainment.  His letters were upbeat and positive.  War didn’t sound so scary at all.

Letters from Charles never mentioned danger.  They never described exactly what he was assigned to do or even where he was.  He mentioned that he censored his letters so that they would be approved to leave the base, leaving Elizabeth to wonder what he was omitting.  He often looked forward to the day he would come home, and he always signed off with the same encouraging closing: “Thumbs up!”

As the oldest boy in the family, Charles was full of advice, especially for his younger brother, Lewis.  Even from across the globe, he advised Lewis about girlfriends and class schedules.  He told Lewis to keep his options open with the ladies, even though Charles himself was clearly sweet on one young lady, Doris, whose name was mentioned frequently in his letters.  He asked Lewis to send him pictures so that he could stay connected to what was happening at home.  He told Lewis what classes he should take in high school and was clearly disgusted, even in the midst of war, when his little brother did not take his advice.

Charles was thoughtful, as well, remembering his mother on important dates throughout the year.  He must have known how much she worried about him.  His Mother’s Day message in 1944, so simple and plain, was the most beautiful Mother’s Day gift that Elizabeth could have received while he was gone.  Her tears, as clear as glass, left no stains on the precious letters from her son overseas, letters that she opened oh-so-carefully. 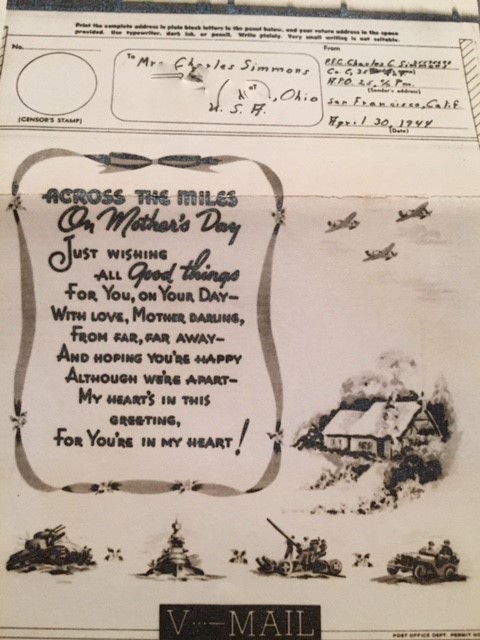 Elizabeth must have read her Mother’s Day note a thousand times before safely tucking it away in the box where she kept all of Charles’ letters.  Gently touching that paper, running her fingers across his ink on the page, was the closest that she could come to embracing her son.  To the world, these men in uniform were so strong and so brave.  But to her, Charles was so very young, hardly a man himself, really.  Just a few years before, he had still needed her advice, her reassuring touch, her loving care.  She had gently washed and bandaged his skinned knees not all that long ago.  Yet now he and so many young men like him had been entrusted to save the world. 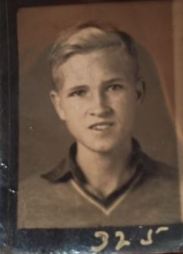 Days and months passed, and Charles remained at war.  Elizabeth was comforted by his letters, but sometimes there were long spans between them, and this made her nervous.  If she waited long enough, another letter always came.  It would include an apology for the long delay, explaining that he had been quite busy with his responsibilities, although exactly what his duties were was a bit of a mystery.  Each letter provided some  solace, but Elizabeth knew that by the time she received it, time had already passed, and the reassurance of his safety was actually old news.  As soon as one note was received, she eagerly awaited the next.

In the meantime, Elizabeth loyally supported her son from afar.  She hung a  banner in the family’s front window for everyone to see and took Maxine’s picture in front of it. 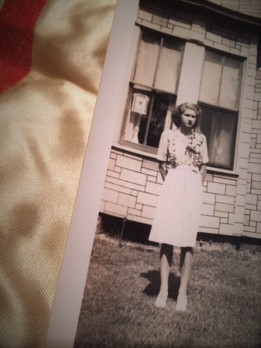 And she clung to a poem (author unknown) that criticized the discontent of those who weren’t directly in the line of fire.  How dare someone complain about rationing when her son’s life was on the line?

In January 1945, Elizabeth received a letter with a little more information than usual.  Charles’ letters had been few and far between for a while now, but in this one he shared, “We are now allowed to say that we are someplace in the Philippine Islands.”  What a relief it was to know where her son was actually located!  She could point to it on a map.  She could imagine the climate and the scenery where he was.  “I have picked up a few more souvenirs,” he said, although he explained that he wouldn’t be able to send them for a while.  Someday, she thought, they would look at those souvenirs together, and he would tell her interesting stories about the culture and the merchants there and how much he had paid for the beautifully crafted and exotic gifts. 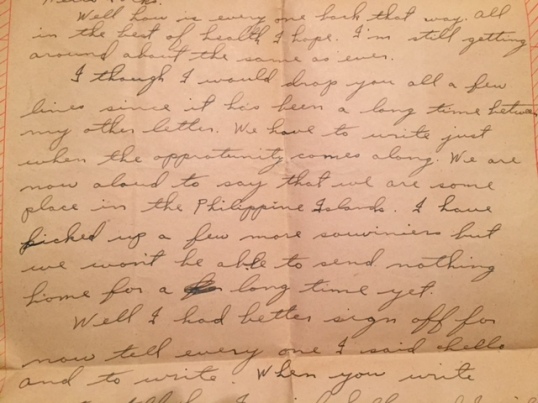 As always, Charles had asked for more letters.  Over the previous months, their letters, flying back and forth across the sky and over the ocean, had created an invisible web that kept them connected, mother and son.  Even when there was nothing to write about, Elizabeth kept writing.  She would write and write and write, about nothing and about everything, until she could finally see Charles face to face once more. 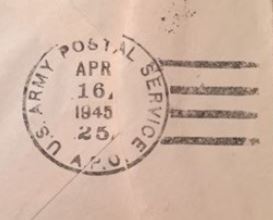 In the first envelope, Elizabeth had neatly tucked a letter full of updates for her son.  The news from home was nothing out of the ordinary.  Lewis has a cold.  Maxine recently visited Betty.  The snow has melted, and Doris performed well in the show last night.

But the war still loomed like a dark cloud over the small town in Ohio.  Charles, of course, was abroad.  There was concern that John could be drafted after being reclassified to 1A.  And Chet, another local boy, was being held captive in an enemy prison camp.  “Thumbs up” was now “Keep praying.” 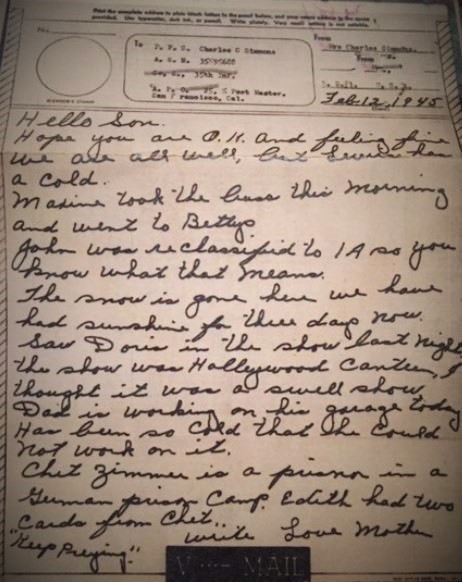 And then there was a second letter from Elizabeth, a letter mailed in March of 1945.  Elizabeth wrote about the recent flooding in the area and how the mail had been delayed.  There wasn’t much to share, really.  The news at home was mostly uneventful.   The letter was a bit mundane.

But then, the ending.  A simple statement that was dripping with emotion.

And their standard closing, “Thumbs up.”

And something in my stomach turned, and my throat tightened at the thought of Elizabeth’s anguish, her desperate wait for a response.  The sadness rushing to my eyes threatened to interrupt the story when I realized that here, in this box full of letters from Charles, I was holding two letters from Elizabeth.  Two love letters from a mother to her son.  Two letters that she had mailed to the Philippines.

Two letters that should not be in this box of mail that she had received.

Two letters that confirmed that what she had always feared had come true. 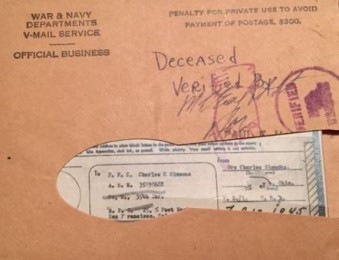 The Elizabeth that I knew lived in a nursing home.  She was elderly and frail.  I don’t remember seeing her stand or even sit up.  I remember her as a tiny, fragile lump beneath the covers.  Her lips were dry, and her words were mumbled, and she was hard for me to understand.

My mother said that something tragic had happened to Elizabeth once.  She said the people closest to Elizabeth claimed that she had never been the same again.  But my mother loved Elizabeth; she had fond memories of her grandmother.  For me, at five-years-old, my great-grandmother and I had nothing in common.  Elizabeth, to me, was lost.

Until I met Elizabeth, a young mother of sons, just like me, a mother who loved courageously and prayed steadfastly and hoped fiercely for the well being of her greatest treasures, her children.

Until I found her in a box of old letters.

We often associate love stories with courtship and romance, but maybe, just maybe, there is no greater love story than the love between a mother and her son.